Thanks to the generosity of supporters like the Doree Taylor Foundation, Elizabeth Ann Leach Charitable Trust, and the Maine Credit Union League, Good Shepherd Food Bank’s Food Mobile has had a very busy summer. From June 1st to August 31st, we delivered nearly 205,000 lbs of food directly to those in need across the state of Maine – that’s over 100 tons!

During over 30 trips (happening everywhere from Millinocket and Dover Foxcroft, to Lewiston and Lisbon, to Portland and Old Orchard Beach), we delivered much needed staple items to the hardworking Mainers that need our assistance most. Examples of the food that we deliver during Food Mobile distributions include:

In addition to our Food Mobile, this year we also launched our Veggie Mobile program. The Veggie Mobile brings fresh local produce (often straight from the farm) to our network of partners in hunger relief, and direct to individuals in need. During its first season, the Veggie Mobile delivered more than 88,000 lbs of produce through 9 trips in Cumberland, Somerset, Androscoggin, Cumberland, Oxford, Lincoln, Somerset, and Sagadahoc counties. 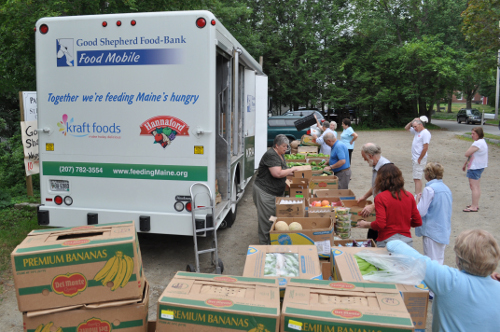