News Center Maine Telethon Raises Awareness of Hunger and $137,000 for the Food Bank 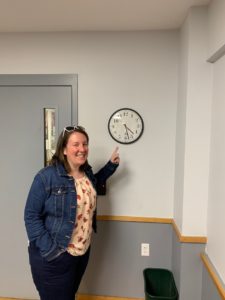 On Thursday, May 2, the second annual NEWS CENTER Maine Feed Maine telethon raised more than $130,000 for the Good Shepherd Food Bank. It was a VERY long day for Community Relations Producer Kim Charland who was there to greet the first group of call center volunteers at 4:30 a.m. and didn’t leave until the unofficial total was reported at 10 p.m.

It was also a long day for Jessica Gagne, who went the extra mile for us—literally. 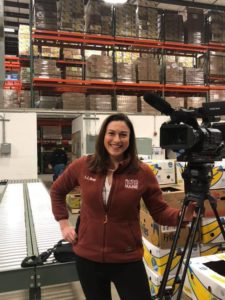 After taking calls alongside our volunteers in the early morning hours, Jessica made the 45-minute drive to our headquarters in Auburn where she provided NEWS CENTER Maine viewers with a look inside our distribution center. Then she drove BACK to the station to work the phones and update viewers on the progress of the telethon until 8 p.m.

One of the things that can be challenging for our organization is talking about all the different ways we serve people of all ages all over the state—we have a big story! That’s why we’re so grateful to Jessica, Lee Goldberg, and the other members of the NEWS CENTER Maine team who report on our programs throughout the year. Here are just a few of the stories they’ve shared with their viewers that enable us to show our donors how we use the money they pledge and why the need is constant.

Behind-the-scenes of our new distribution center in Hampden

Since 2001, we’ve been distributing nutritious food all over Maine from our 53,000 square foot distribution center in Auburn. For years, we also had a small warehouse in Brewer to help us reach Northern and Eastern Maine, but it became clear in recent years that the Brewer facility was inadequate to serve the needs of those communities. In 2015, we decided to do something about that.

We purchased the former Bangor Daily News printing plant in Hampden and we are in the process of renovating the space. Once construction (and our capital campaign!) is done in September 2019, the new 32,000 distribution center in Hampden will help us distribute more meals each year in Northern and Eastern Maine and will improve our level of service to partners in the region.

It’s a fact. Any task is harder to do when you’re hungry and that’s especially true for children. Our donors are especially concerned about kids having enough to eat, so NEWS CENTER visited a summer meal site in Brewer to learn about Good Shepherd Food Bank’s efforts to feed kids over the summer months when school is not in session.

In addition to Summer Meals, we supply food pantries at schools all over the state, assist others schools that participate in our backpack program, and provide after school meals, as well. No one likes to think about kids going hungry but that’s the sad reality for one out of every five kids in Maine. At Good Shepherd Food Bank, we’re on a mission to fix this problem to give children and our state the best opportunity for a successful future.

It’s hard to imagine that after a lifetime of hard work and sacrifice, 16 percent of senior citizens in Maine are at risk of going hungry. All too often, men and women who worked hard, raised families and contributed to their communities are forced to choose between paying for medication, heating their homes, or buying food. It’s a heartbreaking situation that Jessica Gagne recently looked into and learned how Good Shepherd Food Bank takes care of people on fixed incomes who are struggling to make ends meet.

After spending much of their lives taking care of others, it’s extremely difficult for senior citizens to seek help for themselves. In addition to supplying food pantries, delivering healthy food to apartment complexes and churches enables senior citizens to receive the assistance they need without compromising their pride or dignity.

Helping a single mom turn things around and inspire others

Did you know Good Shepherd Food Bank distributes healthy food to over 400 pantries, soup kitchens and other partners throughout the state? We help local food pantries keep their shelves stocked so they can serve people in their community who are going through a tough time. People like Kelly from Bar Harbor, a single mother of two young boys.

After her divorce, Kelly did what most Mainers do when they’re faced with a crisis. She put her head down and did the best she could on her own. It took a friend telling her that getting help for herself was the best way to take care of her two boys. Once she started visiting her local food pantry, Kelly learned that when you stabilize one part of our life, you have the energy and resources you need to move forward. The only thing tougher than asking for help is sharing your experience with the world. Thanks to Kelly’s bravery and Hannah Dineen’s willingness to tell her story on NEWS CENTER Maine, thousands of Mainers know they’re never alone.

At Good Shepherd Food Bank, we rely on the media to share our story and donations from business and individuals to fund all of our programs. For the past two years NEWS CENTER Maine’s Feed Maine telethon has been the ultimate win/win for us and the people we serve raising more than $300,000. We hope the videos in this post give you a better idea of how we’re putting these donations to work and why we’re always asking for additional support.

If you’d like to support programs like the ones you’ve learned about today, you can still donate to the Feed Maine campaign and add to the telethon total! If you’d like your donation to go towards the construction costs of our new distribution center in Hampden, CLICK HERE and your gift will go straight to our Food For All Campaign. Thanks for your support and thank you, NEWS CENTER Maine for being such a great partner!