On September 26, 2019, Good Shepherd Food Bank hosted the grand opening of our new food distribution center in Hampden. The event marked the completion of a $5 million capital campaign, Food For All, that funded renovations of the former Bangor Daily News printing plant. More than 900 donors contributed to the campaign with gifts as small as one dollar and up to one million dollars. At the opening, the Food Bank announced the building’s dedication to its longtime partner, Hannaford Supermarkets, naming it the Hannaford Center.

The campaign and all of its donors are helping the Food Bank reach our bold goal of ensuring that all food-insecure Mainers will have access to the nutritious food they need to thrive, when and where they need it, by 2025. Designed to augment the Food Bank’s 56,000 square-foot warehouse in Auburn, the new distribution center has allowed more efficient, effective, and equitable distribution of food to central, northern, and Downeast Maine.  At the time of its dedication, we were unaware of how fortuitous the facility’s opening was and the important role the center would play in helping our neighbors during the 2020 global pandemic.

Pivoting in a Pandemic

When the COVID-19 pandemic hit Maine in March, hunger climbed drastically statewide due to the economic impacts of COVID-19. According to Feeding America’s Map the Meal Gap study, which uses the most recent data from the United States Department of Agriculture (USDA) and Census Bureau, food insecurity levels in Maine could increase by as much as 40 percent in 2020, depending on the sustained growth in rates of unemployment and poverty.

Because of the investments in infrastructure and the new facility in Hampden, Good Shepherd Food Bank was prepared to take on these uncharted waters and support our neighbors in need. Between March and June 2020, the Food Bank distributed 11.6 million meals to our network of more than 500 statewide partners — including food pantries, shelters, meal sites, school partners, and healthcare centers. Of those meals, over 1 million were distributed from the Hampden distribution center — a 136% increase from March to June 2019.

We more than tripled food purchasing this year, spending $3.7 million on food to help meet the increased need when donations of food were down due to back-ups in the supply chain. All of this food was distributed at no cost to our partners.

Hampden’s new location has been convenient for our partner agencies in Northern and Eastern parts of Maine. Jennifer Jones from the Bar Harbor Food Pantry states, “The new Hampden center has made such a difference in how we are able to access fresh produce throughout the month. Also, the center is allowing the network to rescue and purchase more produce from farmers because of the new cold storage capacity.”

A Facility Built for the Challenge 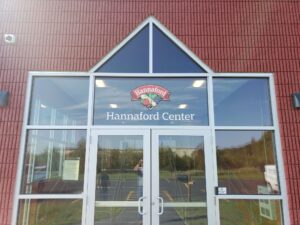 While the needs and challenges presented by the pandemic are ever-changing, Good Shepherd Food Bank continues to serve the state of Maine, as we always have. As we mark one year since the grand opening in Hampden, we are incredibly thankful for the support from our donors, partner network, and volunteers. We wouldn’t have successfully pivoted, responded to increased need, and helped our neighbors during this pandemic without this solid foundation.