Pandemic-level rates of food insecurity are on the decline, yet an estimated 13.5 percent of Mainers still expected to face hunger

Nearly 14 months after the COVID-19 pandemic hit Maine and caused the highest rates of hunger since the Great Recession, Good Shepherd Food Bank is feeling hopeful as hunger rates inch closer to pre-pandemic levels. Yet Maine’s largest hunger-relief organization cautions that there is still much work ahead.

“We all want a ‘return to normal’ in our lives—but settling for pre-pandemic rates of hunger in Maine is not enough,” says Kristen Miale, president of Good Shepherd Food Bank. 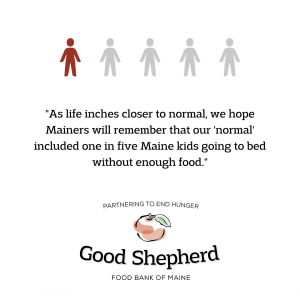 “Our network’s collective mission is to end hunger, so to see numbers trend downward is a cause for celebration and a recognition of our partners’ hard work,” commented Miale, “but we have a long road ahead.”

Even with the new food insecurity projections, as many as 13.5 percent of Mainers could face hunger—and the disparities within those numbers are stark with disproportionate impact. Counties like Cumberland and York saw food insecurity grow at higher rates during the pandemic due in part to their lower pre-pandemic rates of hunger. Meanwhile, Somerset, Aroostook, and Washington counties had the lowest growth rates during the pandemic but they still have the highest rates of hunger of any county across New England. In fact, projections show Somerset County with the highest rate of both overall food insecurity and child food insecurity in the entire northeast, with the exception of Bronx County in New York.

In addition, significant disparities within communities of color are expected to continue despite the overall decreased projections. According to data from the Maine Center for Economic Policy, pre-pandemic levels of food insecurity for Maine households of color were double the rate of all households, and black households had rates of hunger that were nearly three times as high.

“When a crisis hits, those who were already marginalized and suffered are hit the hardest and the COVID-19 pandemic was no exception,” reflected Miale. “Even if we reach pre-pandemic levels of food insecurity, there are communities that are experiencing far higher rates of hunger and will require a more intentional response by the Food Bank and our network of partners.”

The Food Bank credits a mix of factors to the improvements for the overall food insecurity outlook. At the top of that list is its network of more than 500 community partners, which helped the Food Bank distribute 31.7 million meals during the first 12 months of COVID—a 28% increase over the 12 months pre-pandemic. This growth in food distribution was fueled by philanthropic investments from concerned individuals, businesses, and foundations across the state.

Unprecedented federal and state efforts to fight hunger and put money in the pockets of low-income Mainers are also helping reduce demand on the charitable food network. Expansions to the Supplemental Nutrition Assistance Program (SNAP) and U.S. Department of Agriculture school nutrition programming, such as the Pandemic Electronic Benefit Transfer (P-EBT), mean that more Mainers can access nutritious food from their local grocery stores rather than at a community food pantry.

“The COVID-19 crisis has brought an acute awareness to a persistent problem that existed long before the pandemic, and as life inches closer to normal, we hope Mainers will remember that our ‘normal’ included one in five Maine kids going to bed without enough food,” said Miale. “The issue of hunger needed this attention ten years ago—we need to make up for lost time and use what we’ve learned during COVID to end hunger once and for all.”

The Food Bank announced in January its bold $250 million Campaign to End Hunger in Maine, designed to ensure every Mainer has access to enough nutritious food when and where they need it by the end of 2025. The organization has raised $133 million, or 53 percent of its goal to date. Funds raised during the COVID period and throughout the campaign will help reduce hunger overall and will be invested strategically to address racial, geographic, and other disparities between now and 2025.