Stories from the Road: Charitable Roots 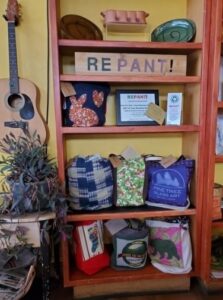 All across the state, kids are making a difference in the fight against hunger, from volunteering at local food pantries and learning about the causes of food insecurity, to creating awareness of the need to give back to local nonprofits working on the hunger-relief frontline. We were recently told a story that touched our hearts. It is one about sparking change and giving back; how one grandmother introduced her grandson to her charitable endeavors, which led him to seek more about our work at Good Shepherd Food Bank and our network of over 500 partner agencies.

Jackson Zinchuk is your average seven-year-old second-grader. He likes sports and spends his remote learning Mondays with his grandmother, Robin Zinchuk, in Bethel. The former executive director of the Bethel Area Chamber of Commerce, Robin, is active in the community and a Rotarian for almost 30 years. On their Mondays together, they’ve had more time to talk and connect. Jackson was intrigued by his grandmother’s work with the local Repant! Totes Project she was involved with at the Bethel Food Pantry and District Exchange.

Repant! Totes is an initiative to keep clothing out of landfills and uses upcycled men’s slacks with the décor of upcycled t-shirts, fabrics, and strappings to make totes. These totes were then available throughout Bethel at different locations with a note explaining the project and a recommended donation of $25 per bag. The beneficiaries of the program donations are the Bethel Food Pantry and District Exchange, the local school’s backpack program, and the Smile fund (paying for restorative dental work for those who cannot afford it). In one year, 375 totes were volunteer-made! 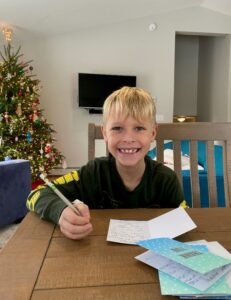 After learning about the project and witnessing his grandmother make these totes, he wanted to learn how to sew. So, she had him sit with her at the sewing machine, and they made a tote together. From there, Jackson was curious about the organizations the totes were benefiting. Robin explained to him where the money from the totes go, and that he was a very fortunate young boy and said, “You’ve never been hungry, never been cold, and that’s not the case for many children in the state who are hungry and cold and don’t have necessities such as food and heat.”

That’s when he said, “Meme, I’d like to do a fundraiser.” And she said, “What?” and he replied, “To help hungry people.” She then explained to him how several towns have food pantries and how Bethel has a food pantry; and if he wanted to do something that benefited people in his town and her town, the best organization would be Good Shepherd Food Bank, which supplies all of the state’s food banks. He said, “Okay, that sounds great.”

With both of their birthdays coming up, they agreed to do a birthday fundraiser. First, Jackson wanted to ask people to put $5 in a jar after they came home from the grocery store for the food donation. She explained that Facebook was a better way to share their fundraiser. They decided on a goal of $500, “And, you know, that is a lot of money to a seven-year-old,” Robin said. Before the first day was complete, they had raised $470, “I called him and told him what we raised and asked him if we wanted to be satisfied with that because we still have two weeks left. So, he said, let’s increase the goal. We increased it to $750 and then to $1,000, $1,250, and then to $1,500 and on and on, we finished the fundraiser with $3,100,” exclaimed Robin, “He was ecstatic and asked his mother to check the fundraiser every day. He was super thrilled! And, one of the nicest things, my daughter-in-law is having him write thank you notes to all 76 donors.” 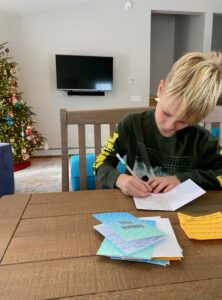 In the end, his grandmother was pleased Jackson learned how to take an idea and turn it into action. He was able to see how helping others requires some creative thinking, being thoughtful, and having follow-through.

Thank you to both Robin and Jackson. You raised enough money for 9,300 meals!

Your accomplishments demonstrates an outstanding commitment to raising awareness of food insecurity and we give you our thanks for igniting a spark in the hearts of our future generation of charitable leaders.