Our next pantry visit took us to Union, Maine, in the heart of rural Western Knox County, where we visited our partner Come Spring Food Pantry. We met with volunteer and powerhouse Lorain Francis, who is at the heart of hunger-relief work in Knox County and a Building Advocates Leadership Program mentor. She introduced us to Pantry Manager Tracy Spaulding and a few regular and dedicated volunteers.

Lorain was excited to show us their newly purchased building, freshly painted and recently opened in the summer of 2021. In the spring of 2021, they relocated from the Thompson Community Center to better advance their goals of feeding neighbors with dignity while promoting health, opportunity, and hope.

“We are very excited to be in a great visible location and building where all our neighbors in need can find us, and get both food staples and fresh food in a safe convenient manner. Supporting the area of Western Knox County is critical to help our communities fight food insecurity,” Lorain stated. 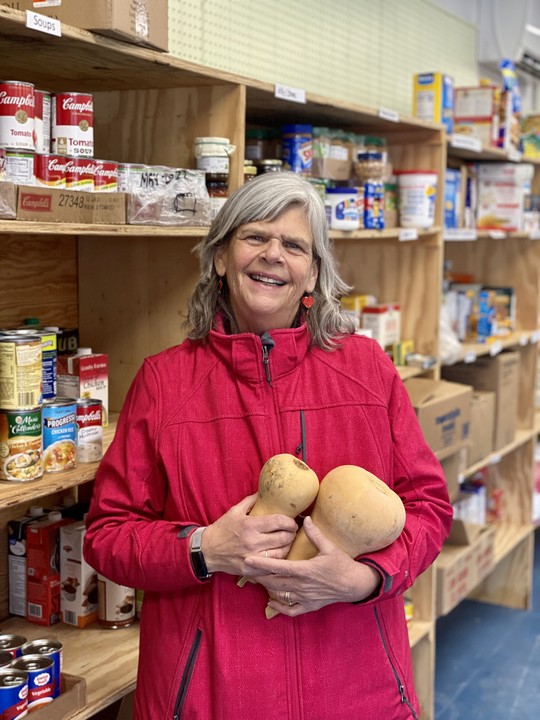 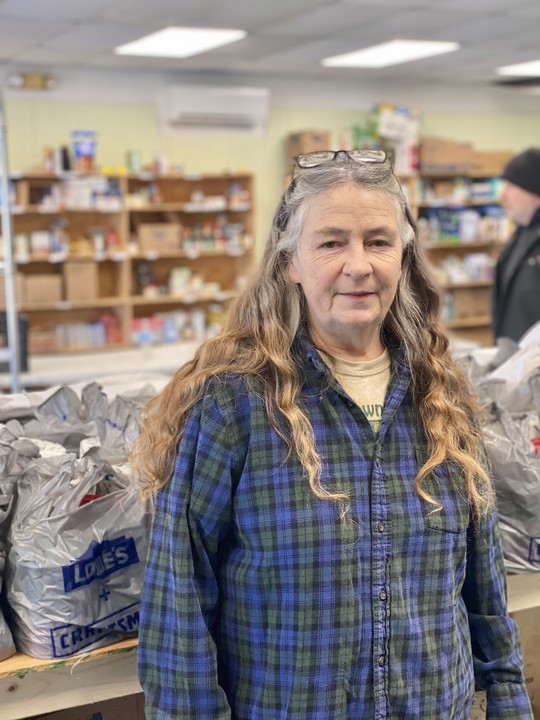 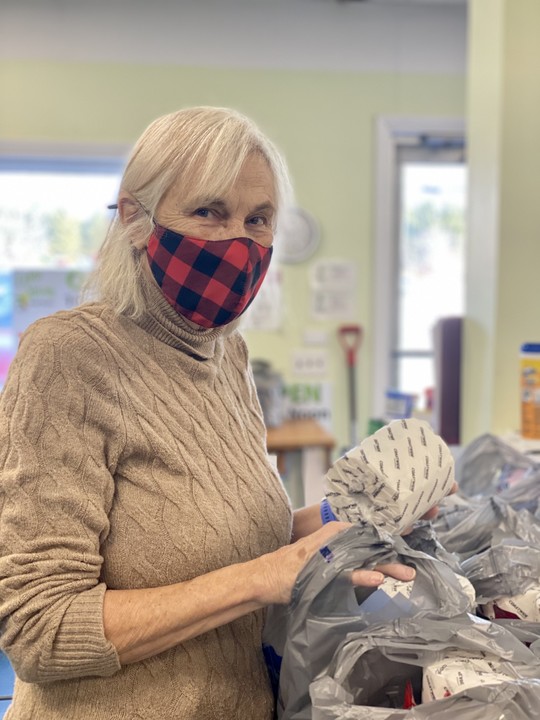 Founded in 1991 through a service project at the Come Spring School, the food pantry was operating at the Community Center. Community members didn’t particularly know that the pantry was there because it was hidden in the back of a building. The new building has increased visibility and has helped bring awareness to the community that a food pantry serves Union, Appleton, Washington, Searsmont, Warren, Hope and South Hope.

Lorain shared the story of a veteran living in the woods of Union during the winter, and he said, “I didn’t know there was a food pantry in Union, had I known I would not have gone hungry on many days. I hitchhiked to Rockland to get food at AIO when I could, about once a month.” Proving that the need for a new space should be the top priority.

She also shared how a father who became homeless with two teenagers began living in a camping trailer in Union. He was thrilled to learn about Come Spring Food Pantry. “He told us he was starting from scratch setting up a home for his family and needed help getting started. We were able to help him with food, paper goods and even special soap and shampoo for the teenagers,” said Lorain. A volunteer assisted him in making healthy choices for his kids that he could cook in a crockpot, his only cooking appliance. 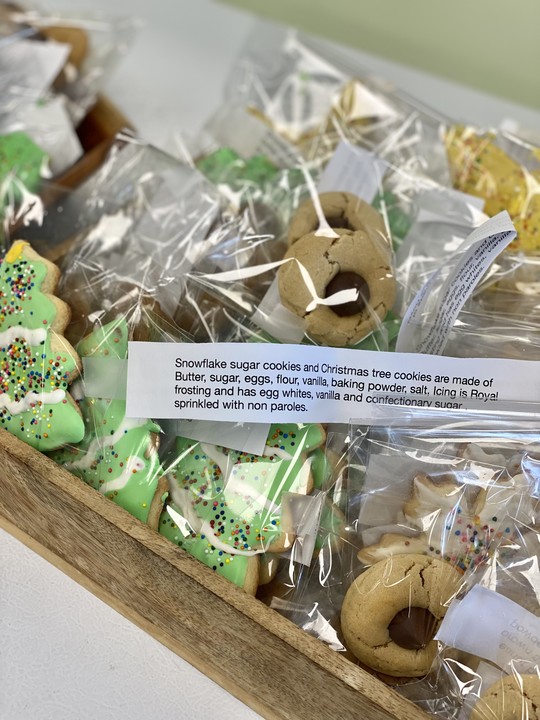 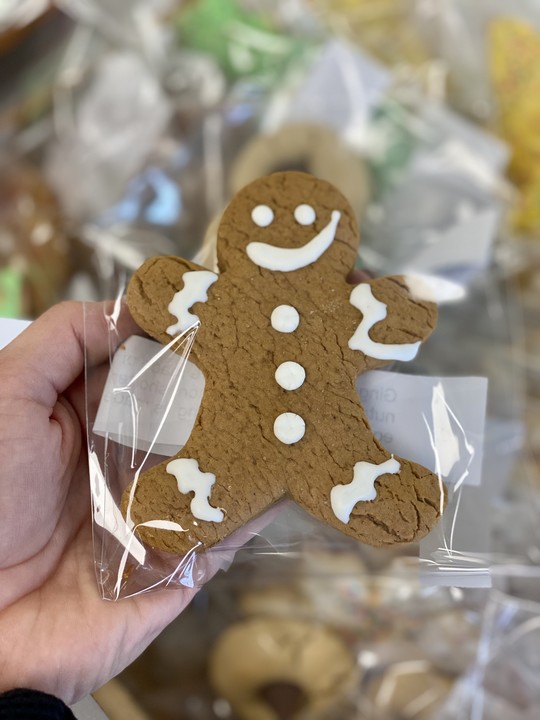 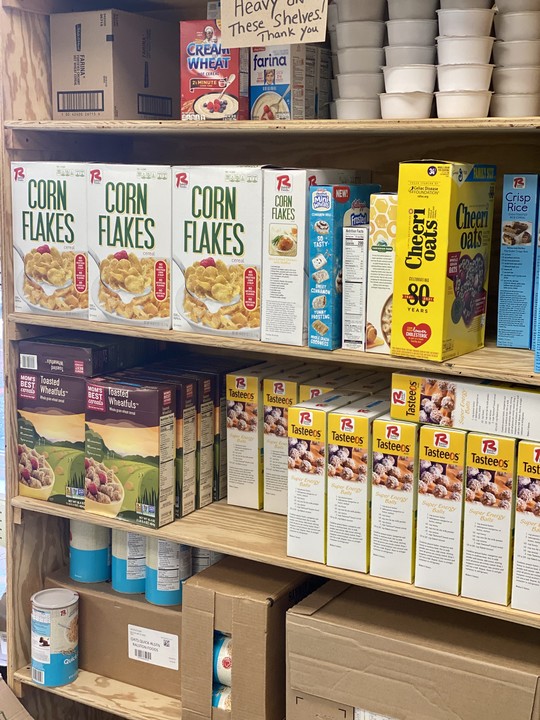 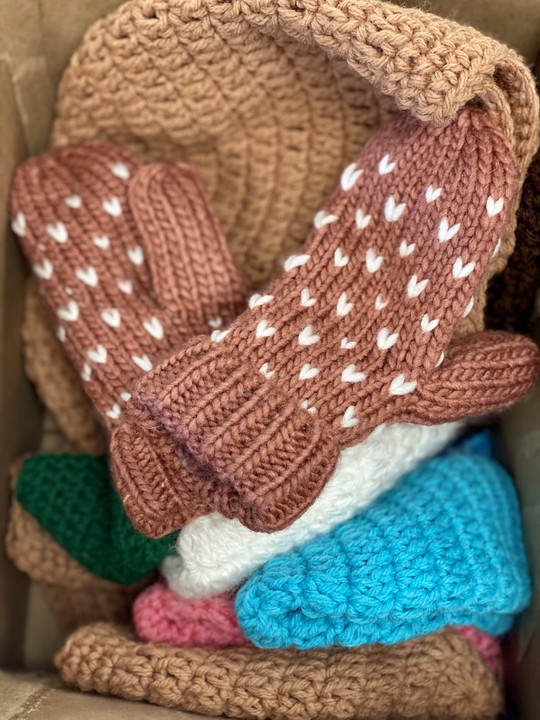 The pantry operates under a modified pandemic curbside distribution plan by packing bags of staple food items. They offer a client-choice model of fresh vegetables and other items donated or purchased from Good Shepherd Food Bank of Maine to help ease the cost of running a household. They get fresh produce from Erickson Farms and Sani e Felici Farm through the Food Bank’s Mainers Feeding Mainers program and other fresh produce from Knox County Gleaners in the summer. During the winter, they encourage the households visiting the pantry to come to them for basic foods and use disposable income to heat their homes and keep their cars running to ensure good transportation. They currently have seven regular volunteers.

Since moving to their new space, they’ve installed a new roof, heat pumps, insulated interior doors, and added LED lighting, so the pantry is energy efficient. They painted the building barn red and added new signs, easily identifiable and welcoming. The pantry has seen an increase of ten new families to their list of 25. 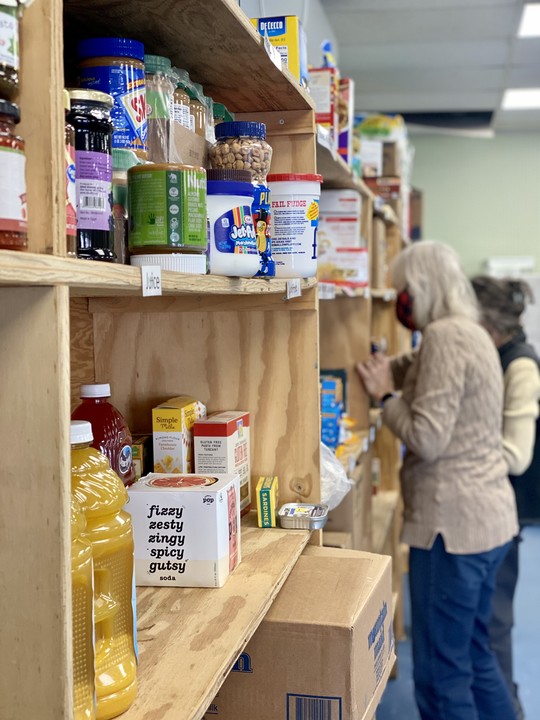 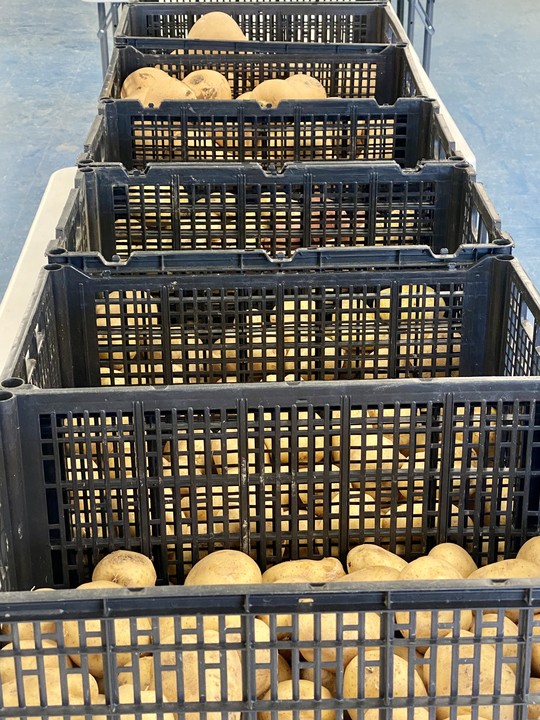 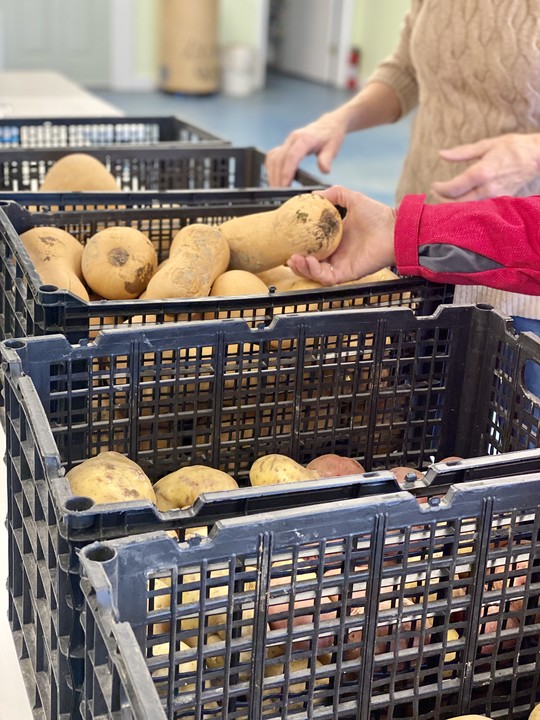 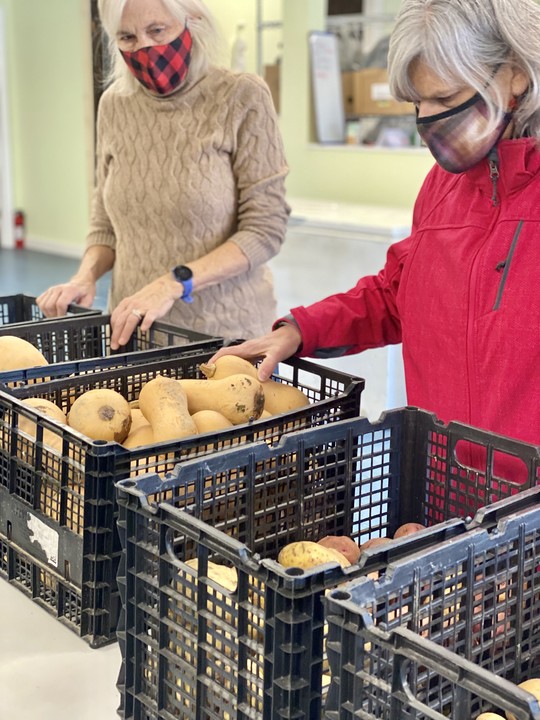 This is just a start for the pantry, with intentions set and a bright vision; they plan to move from curbside to a client-choice shopping area with space for pantry visitors to meet people, learn and takeaway information and ideas to improve their health and quality of life. They also have the resources and space for a community kitchen to provide opportunities to educate, share nutritional information and recipes, basic cooking skills, and food safety. They plan on starting and continuing relationships with Knox County Gleaners, collaborations with the SNAP-Ed program, and local chefs that will provide ready-to-heat and eat meals using fresh vegetables and food available in the pantry.

They plan to dedicate the outside of the pantry to community use, with walking paths, grow to give garden spaces, and continue to utilize the land next to the pantry for The Union Farmers’ Market, which was done in the summer of 2021. They also plan on becoming the Western Knox County food hub distribution point with space for refrigeration, a root cellar cool-bot container, and a commercial kitchen for a place to gather for food and agricultural activities and emergency food distribution access for all. “Seeing it all come together is so exciting, like a dream,” stated Lorain. 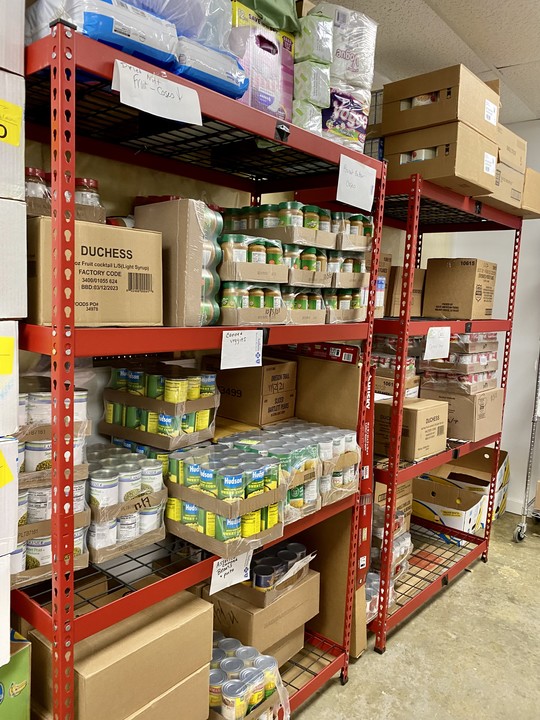 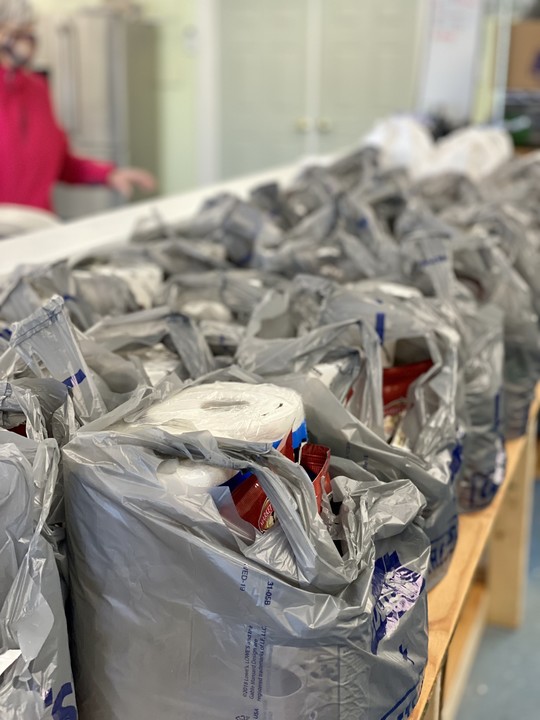 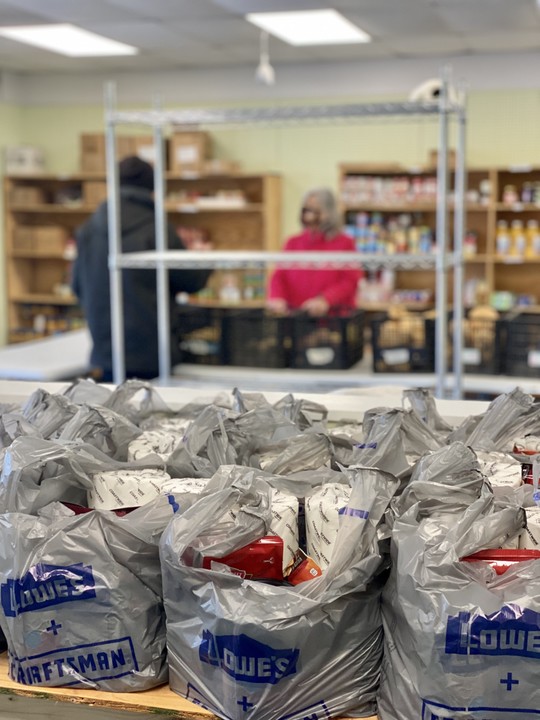 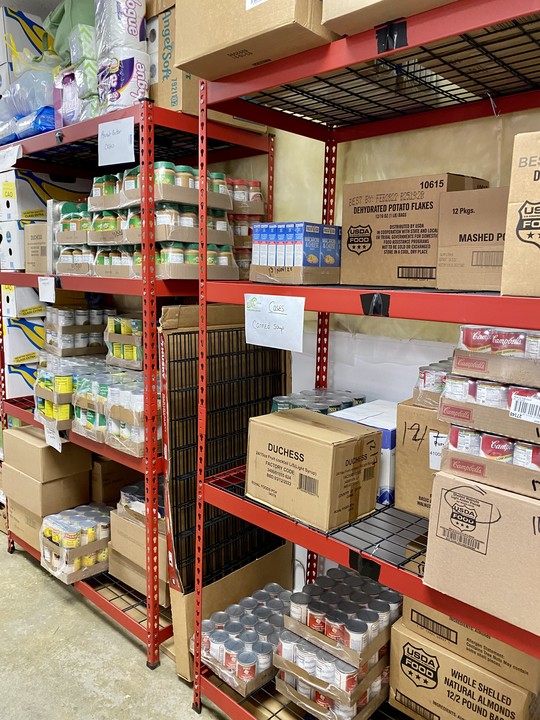 Come Spring Food Pantry offers curbside pickup on the 2nd and 4th Wednesday of every month from 10 a.m. to 12 p.m. and the 1st Tuesday from 5 – 7p.m. Please visit their website or Facebook page for more information about the pantry.

With our partner agencies spread throughout the entire state, there will likely be help nearby if you need food. If you’re looking for help or interested in donating food or volunteering at your local food pantry, please visit our Food Map to find a pantry near you. 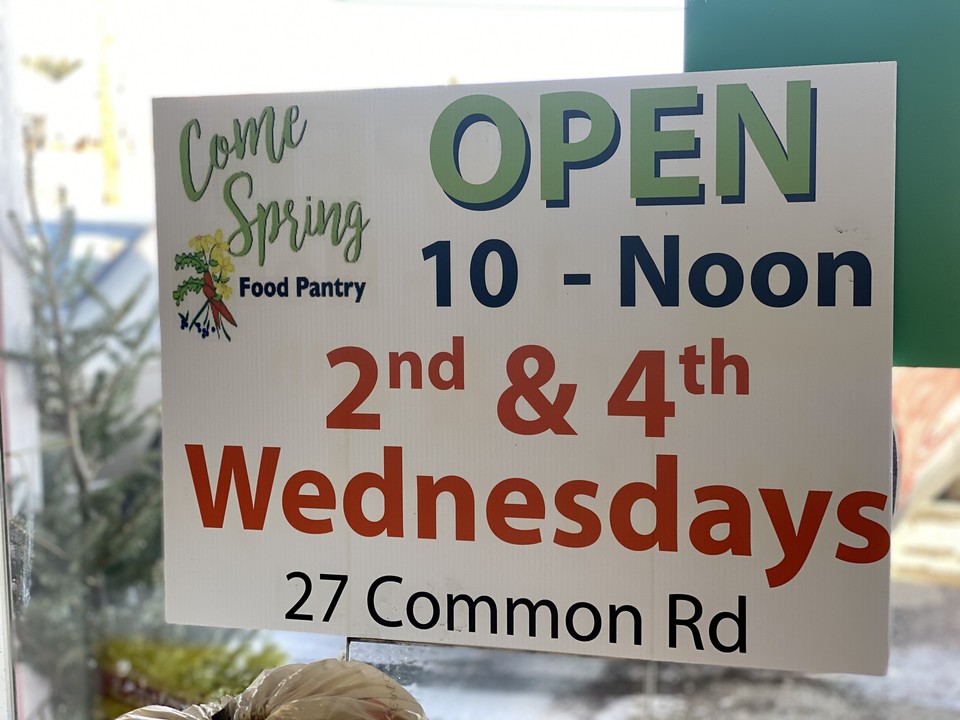