From Food Insecure to Entrepreneur | A Summer Meal Success Story

Nick Mullins stands with his wife Kortnie on the front porch of the five bedroom, 2.5 bathroom house they’re renovating in Bangor. Over the past four months, they’ve transformed the 3,000 square foot, early 1900s “planned book home” from disrepair to perfection with beautiful fixtures and brand new appliances. It’s the kind of house Nick and his family would have loved to have called home during his childhood but never would have been able to imagine. “We moved a lot,” Nick says. “At least fifteen times that I can remember. Not too many landlords are willing to rent to a family of nine for more than a year, so we never stayed in the same house for long.” 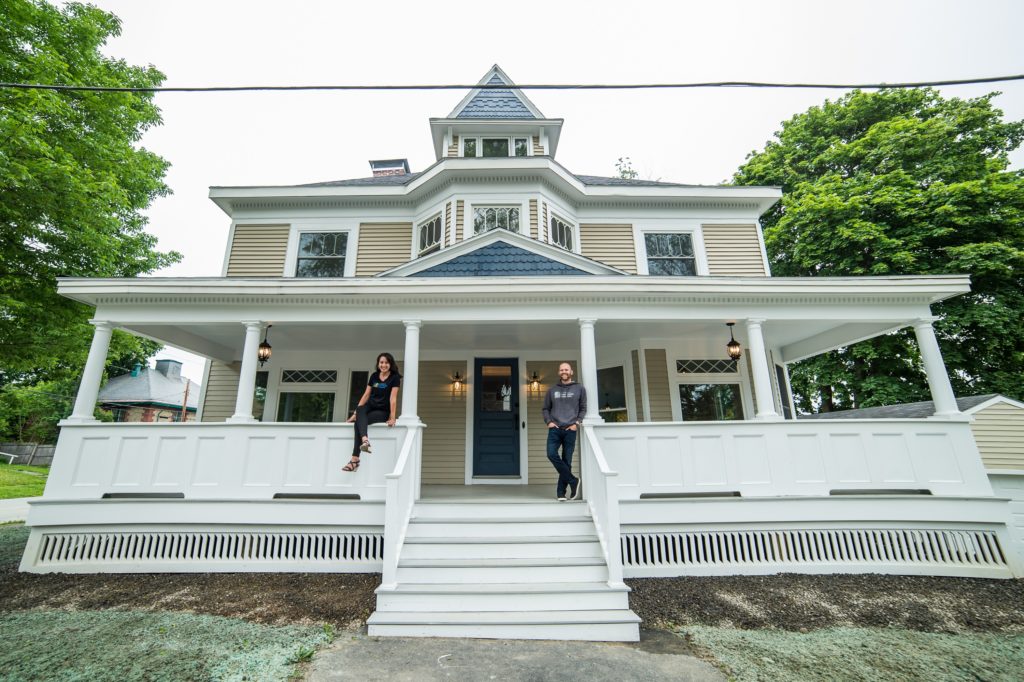 The fourth of seven Mullins children, Nick grew up in a chaotic but happy family. His father worked as an auto technician while his mom stayed home to care for him and his three brothers and three sisters. “My family was filled with a lot of love and a lot of laughs but there was very often not enough food,” Nick says. “Mom did the best she could with tuna casseroles, lasagna, spaghetti and mac and cheese but the breakfasts and lunches we received at school really kept us going.”

When we announced that we were resuming our summer meal program in Nick’s current hometown of Bangor and the neighboring town of Brewer, it sparked memories from Nick’s childhood that he was compelled to share with us. “About 20 years ago, I was one of those kids getting free lunch during the summer time,” Nick explains. “My brothers and I would be playing football in Carpentier Park in Sanford. A U-haul type moving truck would back into place and open the hatch. Two people would start handing out white paper bags filled with food. There was always some kind of sandwich, a fruit cup, chips and a container of milk or juice. The truck came on a daily basis and if it wasn’t for the food I received from those people, I wouldn’t have had any real food to eat until dinner.”

Today, Nick is a successful real estate entrepreneur, but the problem of food insecurity among Maine children continues with 80,000 kids depending on the National School Lunch Program. When classes end, so does their daily connection to healthy food which is why the lunches Nick received from the Sanford School Department and the meals kids will eat this summer from our summer meal program are so important. “My dad worked hard and my mom made the money go as far as she could,” Nick says. “When I think about how tough it must have been for them to get by, I have to believe the free food we got during the summer took away a lot of stress.”

As a business person, Nick sometimes struggles with the stigma that many people have about parents whose children depend on the reduced or free school lunch program. “When I was little and I was hungry, I didn’t think about my family’s situation or where my food came from. I just ate the food and I was happy. Now that I’m older, I realize what a gift that was. If I DID have to think about where my next meal was coming from or if I didn’t get that food, things could have been a lot different for me.”

Nick’s gratitude for the support he received throughout his childhood combined with his family’s struggles finding and maintaining affordable housing inspired him to form Community Real Estate Solutions with his wife. In addition to rehabilitating and selling homes like the one they’re pictured in above, Nick and Kortnie own and manage 50 affordable housing units in the Bangor area that they rent to people who are part of the Section 8 housing voucher program, the Shelter Plus Care program or are receiving general assistance. The work they’re doing is providing affordable housing to people who need it and making Bangor a nicer place to live one house at a time:

At Good Shepherd Food Bank, we love sharing the stories of food insecure children like Nick Mullins and John Martin of The Colony Hotel in Kennebunkport who grew up to do great things here in Maine. Their childhood experiences underscore how helping food insecure children isn’t just the right thing to do, it has a direct impact on Maine’s economy.

What will the children receiving free lunches this summer in Bangor and Brewer go on to accomplish in their adult lives? Only time will tell. The only thing we know for sure is that for reasons beyond their control, these children need this summer meal program. As much as we wish that was not the case, we will work with our partners every day to provide these meals as efficiently as we can and without judgment. It’s never easy, but luckily for us, we have the generous support of our donors and the encouraging words of people like Nick who sums things up perfectly:

“I don’t think there’s a perfect solution to stop people from getting into tough situations or having bad luck,” Nick says. “But there’s always a way to help.”